Hey folks, well six months have now passed since this video from Tasting Nitch was published back on the 31st of March 2017. There was no great outcry for me to respond (and I also happened to be going thru a turbulent time then anyhow), but, nevertheless I was intrigued by how many Beer Tubers seemingly emerged from the woodwork to tag one another and respond to this hugely successful video.

Anyhow, here are my responses to those questions...

To be honest I think it’s something that just evolved naturally over the course of time. It became quite apparent to me that quality, taste, and diversity were more important than just consuming the cheapest and most readily available product for the sake of getting blind rotten drunk. I find Beer to be the most refreshing and satisfying in the pantheon of alcoholic beverages.

Having tried literally hundreds of different beers, many of which were of an exceptional standard – there’s no way I could pick a favorite. It’s just impossible, I could say something today and change my mind about it tomorrow.

3. If you have one beer forever what would it be?

Now, here is something that oddly I have indeed contemplated before, and to answer the question I would have to say that it would be a beer from New Caledonia called Havannah – it’s an extraordinarily delicious amber ale that you could just guzzle all day long.

Easily, given the harsh realities of this world that we live in. Well, the truth is – I’m not healthy at all, but it has got nothing to do with drinking. All my illnesses are stress related. Everyone is broken in some way and has their own crutch – even if that might be going to the gym.

5. Are you an alcoholic?

I’m somewhat skeptical of the entire notion of Alcoholism and the demonization of alcohol in general. I think that addiction to alcohol (or anything really) is symptomatic of some pre-existing form of mental illness. Heck, the world is a very dark place and it’s easy enough to become withdrawn from it after a long run of misfortune. So, no - I would not consider myself an Alcoholic.

That’s easy – Barley Malt. The best part of drinking beer for me is that initial hit of roasted grain.

Not lately, but I have done so in the past with some rather mixed results. It definitely gives you a deeper appreciation of the effort that goes into producing a palatable ale.

8. What was your first beer?

I honestly do not remember. It was probably XXXX Bitter or Victoria Bitter. The choices were pretty limited back in those days.

Nobody in particular. I have more of a collective appreciation for everyone who played some hand in all the wonderful innovations in brewing throughout the ages. 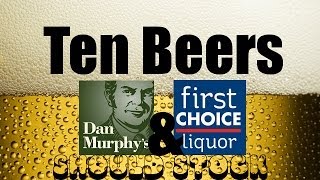